Back to all tours

Slovenia is known as the country on the crossroads of different cultures - Slavic, Germanic, Romanic and Ugro-Finnish. Influences from all our neighbors can also be felt in the local cuisine. During your 8 day excursion you'll visit all the main slovenian tourist attractions and try all our culinary delicacies like Carniola sausague, Bled Vanilla Cream Slice, Prekmurje layered cake, dried prosciutto and wines from different wine-regions. 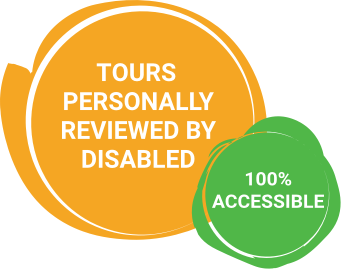 Centuries of influence from the North, South, East and West has left a remarkable mark in the Slovenian way of living, its traditions and food.

“Suha Roba” handmade wooden handicrafts, pottery, colored Easter eggs and laces are only few of the traditional products that still exist. Every part of the country has something unique to show and some different tastes to offer. From the Hungarian-influenced food of Bograč in Prekmurje, through to the Belokranjska pogača bread and Savinjski želodec dried meat to the Mediterranean-style delicacies in the Southwest. Everything washed down with a few drops of wine from a vineyard no more than a few kilometers away. Don’t worry, you’ll do a workout at home…Traveling for the disabled has never been tasty as now! 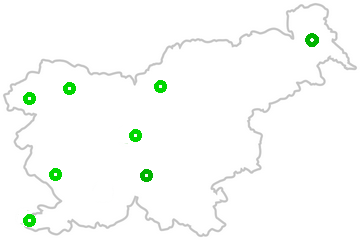 Region famous for its thermal water and spas, superb wine and gastronomic experiences and people's hospitality.

The region is also famous for its scenery and wines that will leave even the pickiest wine experts speechless.

The Logar Valley (Logarska dolina) is one of the most beautiful Alpine glacial valleys in Europe.

Pick up at the airport and drive to Ljubljana

Pick up at the hotel and drive towards South Slovenia

Check-out from the hotel and drive to North-Eastern Slovenia

Check out from the hotel and drive to Styria region

Check out from the hotel and drive to Soča Valley

Check out from the hotel and drive towards the Karst area

Enjoying the Meditteranian climate at the Slovenian seaside

Check-out at the hotel and drive to the airport

Day 1: Pick up at the airport and drive to Ljubljana

Pick you up from Ljubljana airport and transfer to Ljubljana. After you`ve had some rest we’ll have a guided tour of Ljubljana, after which you’ll be able to taste some delicacies from Central Slovenia, like the Carniolan Sausage and Štruklji. Carniolan pork sausage with bacon was one of the favorite dishes of the penultimate Habsburg emperor Franz Joseph and was also tasted in space by an American astronaut with Slovenian roots, Sunita Williams. Štruklji is another traditional dish; composed of dough and made with various types of filling. The first recorded preparation of Štruklji dates back to the 16th century! 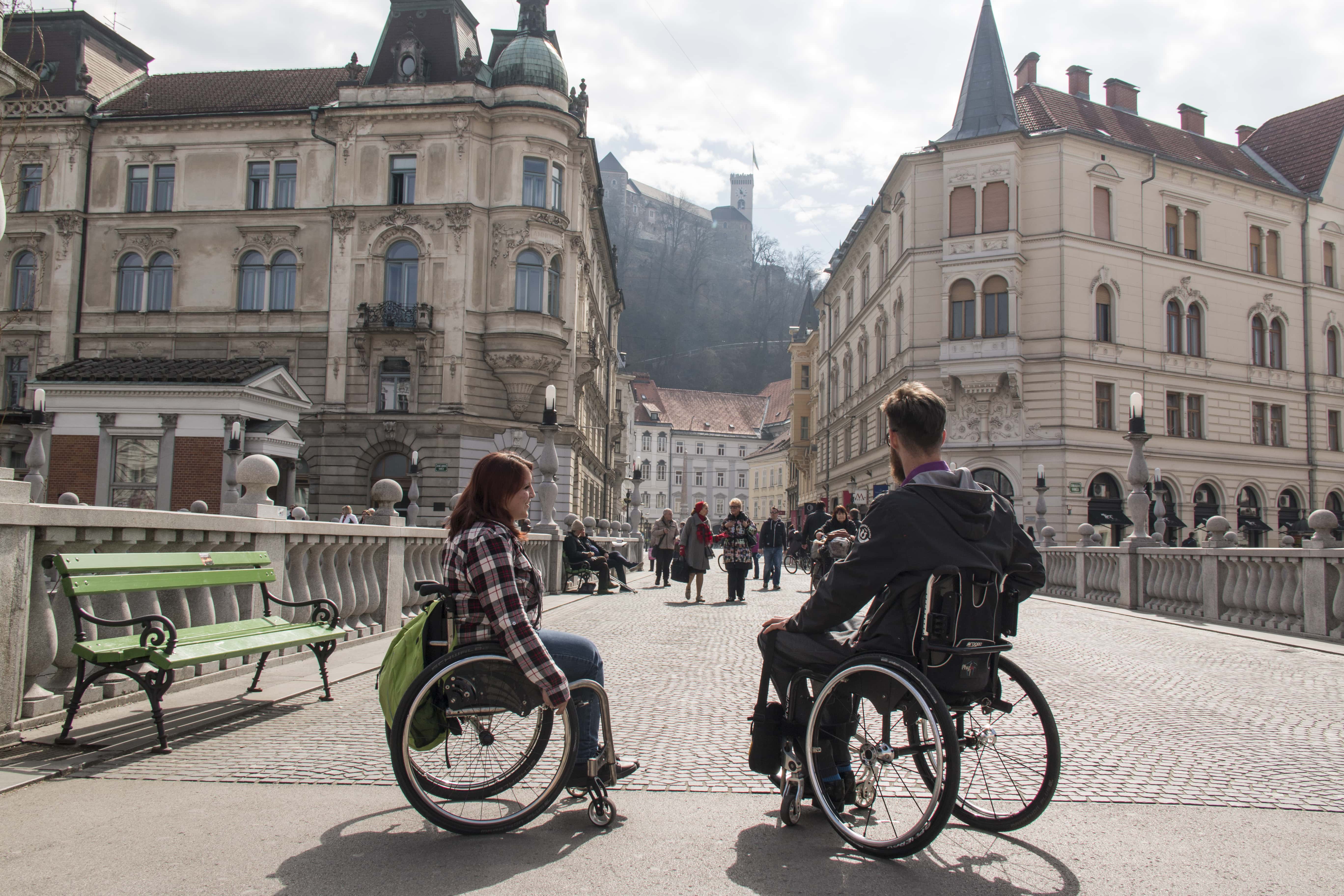 Day 2: Pick up at the hotel and drive towards South Slovenia

On the second day, we’ll head south and enjoy a day trip to Ribnica and Kočevje. We’ll have a special stop in Ribnica where we’ll see the production of “suha roba” (woodenware). Since the 14th century the craftsmen of the Ribnica plain have maintained the tradition of creating wooden goods for everyday use in kitchens and homes. In the year 1492, at the time when Columbus discovered America, the merchants in Ribnica were allowed by the Habsburg emperor Friderik III to sell and export their wooden products across the border. They kept the tradition alive even up to the 21st century. After having a delicious meal, which will include the famous Bela Krajina Flatbread (Belokranjska pogača) and making some souvenirs of our own we’ll return to Ljubljana in the evening hours. 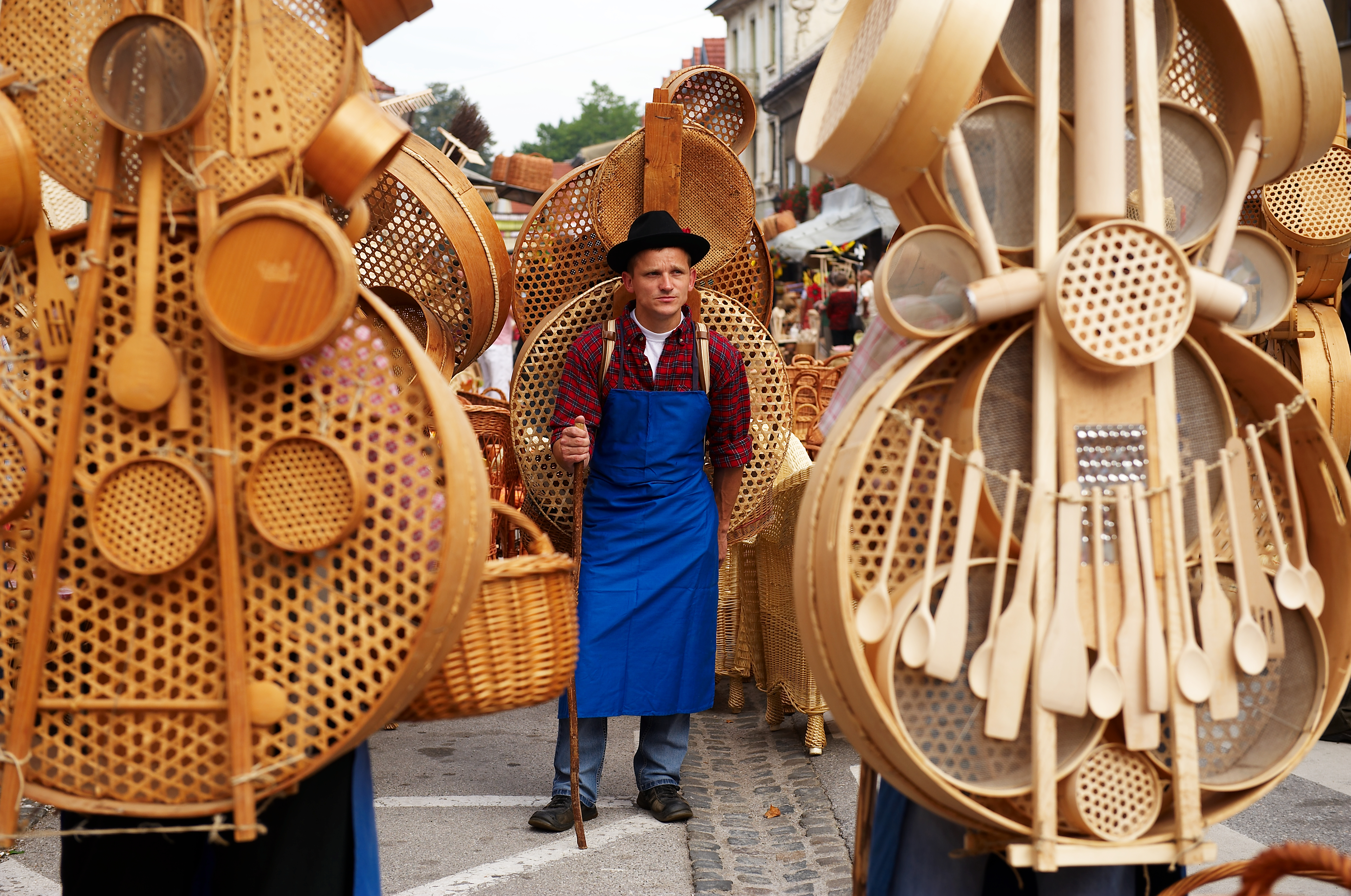 Day 3: Check-out from the hotel and drive to North-Eastern Slovenia

We’ll head towards the Northeast, to the region of Prekmurje, which is famous for its tomato plantations, traditional mills, pottery and the cultivation of orchids. During the time of the Austro-Hungarian empire, Prekmurje was under the direct administration of Budapest, with the River Mura being the border between two entities within the empire. The influence of our Hungarian neighbors can still be noticed in many areas, including the cuisine. We’ll taste some of the Prekmurje regional specialties, which over time became Slovenian national dishes, like Bograč (a stew and a Prekmurje version of goulash) and Bujta repa (hot pot with sour turnips, garlic, onions and pork). For dessert, you’ll try the Prekmurje Layered cake, which contains poppy seeds, walnuts, apples, raisins and cottage cheese fillings. We’ll spend a night either in one of the spa’s in Prekmurje or in the oldest Slovenian town of Ptuj.

Day 4: Check out from the hotel and drive to Styria region

The first part of the day we’ll spend in the Styria region, exploring the Upper-Savinja valley. We will visit the Mozirski Gaj flower park, the largest of its kind in Slovenia. From there we will take a short ride to the Logarska Valley, one of the most beautiful glacial valleys in Slovenia. Here we’ll taste the local specialty “Stuffed Pig’s stomach from the Upper-Savinja valley” (Zgornjesavinjski želodec), whose recipe is more than a hundred years old and protected by law. Our dessert will be the rolled pastry called Potica. The most traditional Slovene Potica’s are made with walnut, hazelnut, poppy seed, cottage cheese etc. The second part of the day we’ll spend in the Upper Carniola region, tasting the local specialties like Zaseka (Bacon relish/Pork mash), Žganci (a dish similar to Polenta) and Ajdovi krapi (Buckwheat flour pastry pockets). The day full of several different regional delicacies will be finished off with the most well-known Slovenian dessert – Bled vanilla cream slice,”kremšnita”. 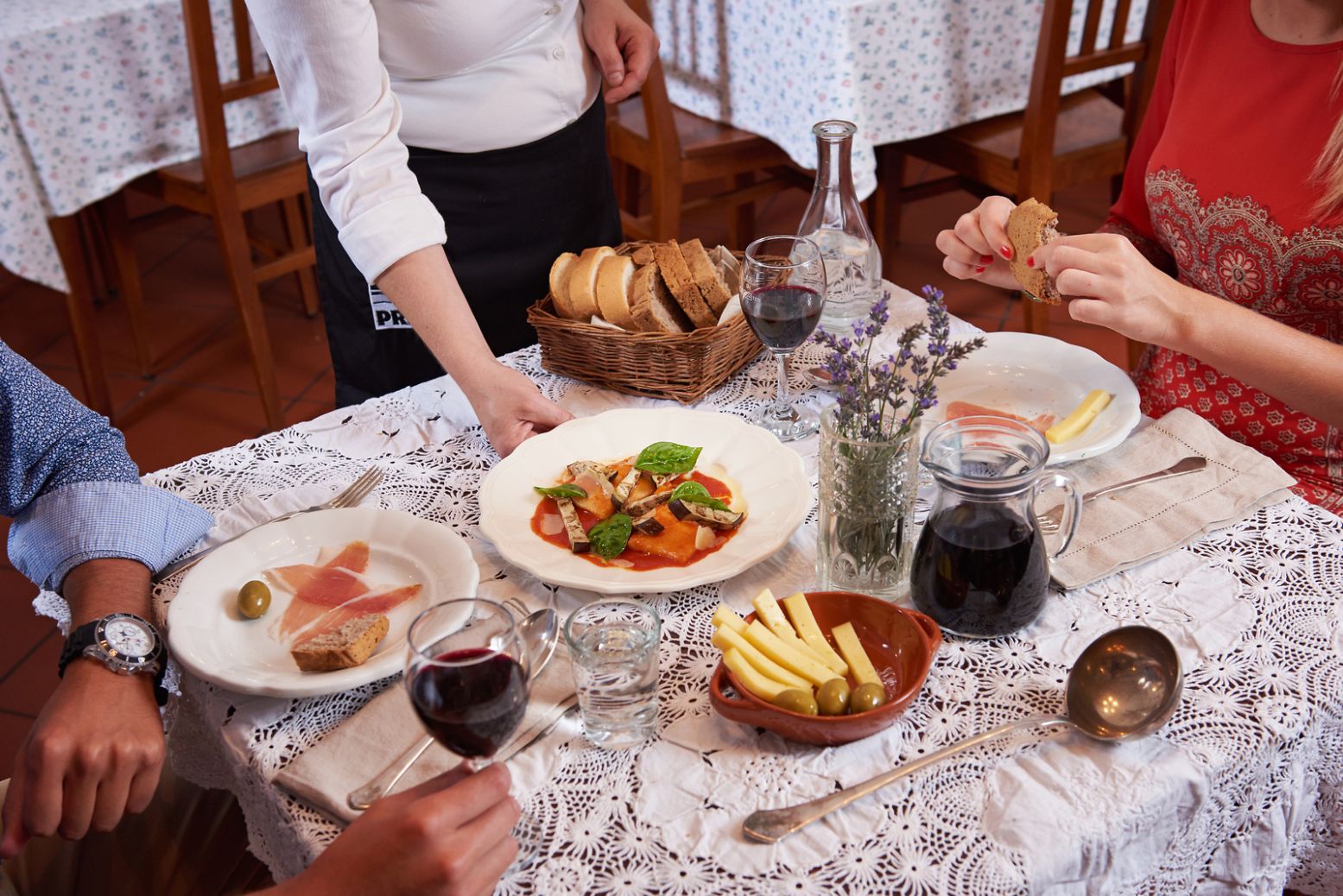 Day 5: Check out from the hotel and drive to Soča Valley

After spending the night in Bled, a fairy-tale like town by the lake, we will head to the Western part of Slovenia, to the miner’s town of Idrija. While the Idrija men were working in the mercury mine, the local women were producing the bobbin tape lace, now known as the famous Idrija lace. The tape is made with bobbins at the same time as the rest of the lace, curving back on itself, and joined using a crochet hook. We’ll then taste the local specialty called “Idrijski žlikrofi” – dumplings stuffed with potatoes, onions, pork rind etc. When our stomachs are full we’ll head towards the Kobarid to the museum of cheese production. We’ll end our day in the Goriška hills with tasting delicious yet not so well-known Slovenian wines (rebula, tokaj, zelen, pinela or vitovska grganja are all found almost exclusively in Slovenia) from the Northern part of the Slovene Littoral wine region. Spending a night between the vineyards and the cherry orchards will add some more local spirit. 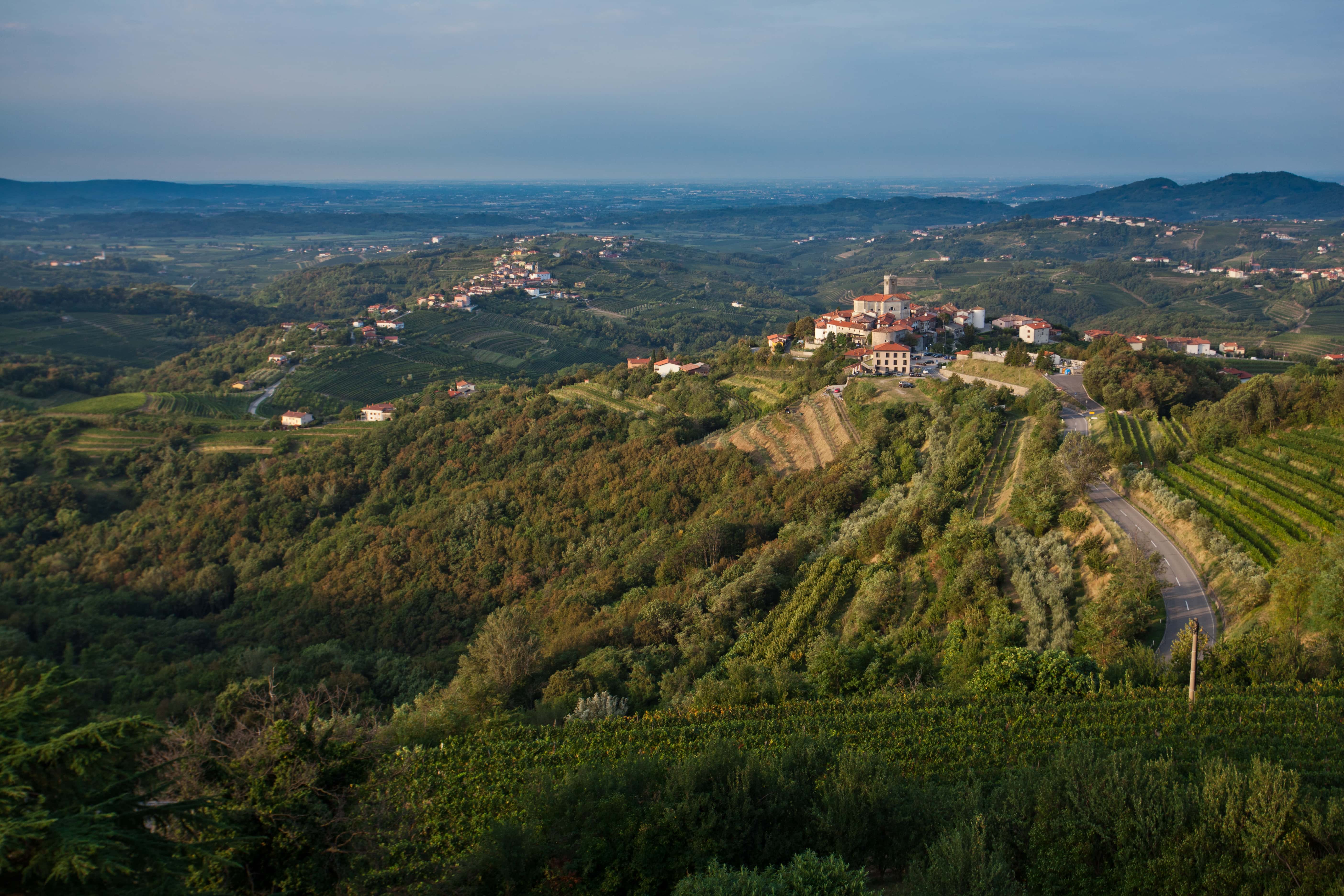 Day 6: Check out from the hotel and drive towards the Karst area

Kras (Karst) to Slovenians mean something like Provence to the French – small hills rising up from a flat terrain that is covered with fields and vineyards. One of the best things about this region is its food and wine. Traditional dried pork prosciutto (pršut) is produced here, which is prepared just by using salt, some local bora wind and a lot of love. When it’s washed down with the strong red wine “teran”, you’ll get an idea of what heaven looks like… We´ll try all these delicacies at one of many farms that offer their homemade food to hungry tourists. The next stop is the Lipica stables, where white Lipizzaner horses have been born and bred since the 15th century. When we arrive at the short but interesting Slovenian seaside, we will base ourselves in a hotel in Portorož, Strunjan or Izola, just a few steps away from the warm Adriatic Sea. 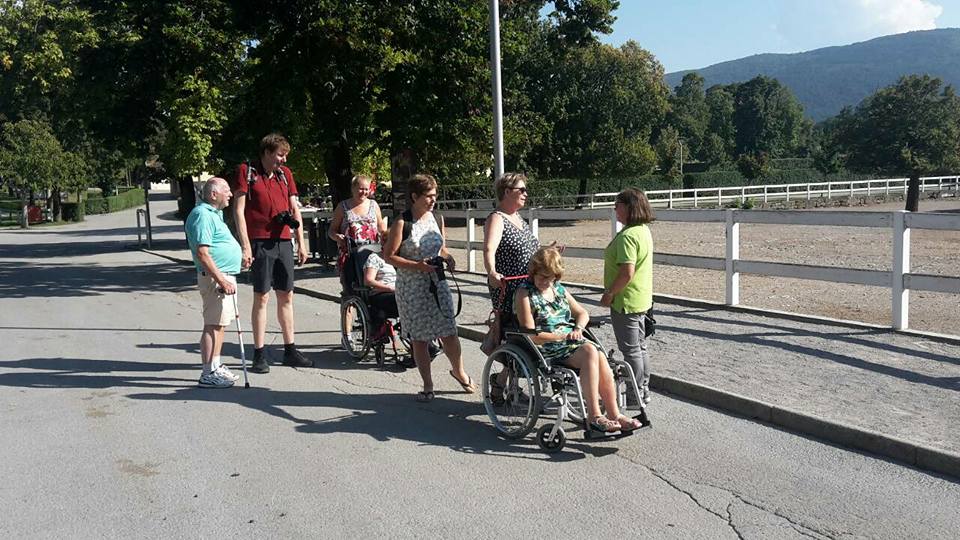 Day 7: Enjoying the Meditteranian climate at the Slovenian seaside

The penultimate day of your excursion will be spent on the Slovenian coast in the most Southwestern part of the country, where olive trees grow, kaki (persimmon) plantations and vineyards still occupy more land than the tourist facilities. In the morning, we will visit Piran. This old medieval town offers beautiful architecture and a rich cultural diversity. After that we´ll take a look around the famous Sečovlje Salt works (Salt pens), which are located just on the Croatian border. After sightseeing, we’ll have a tasting of several types of sea food, indigenous to Istria – fish, calamari, mussels, codfish (Bakala)… In the afternoon, we’ll take some free time to enjoy swimming in the Adriatic Sea or just sunbathing in the Mediterranean sun. 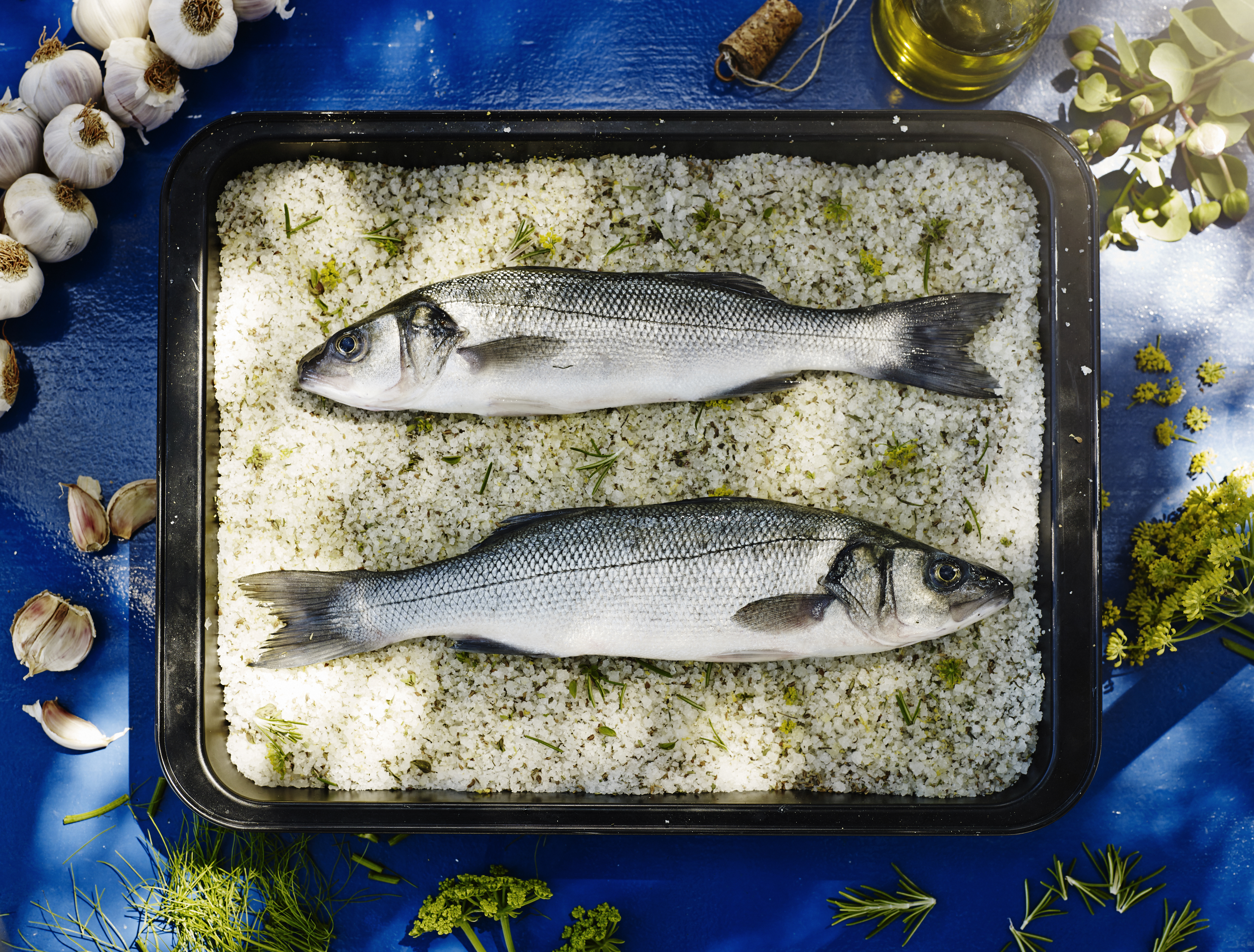 Day 8: Check-out at the hotel and drive to the airport

Transfer to the airport and departure. 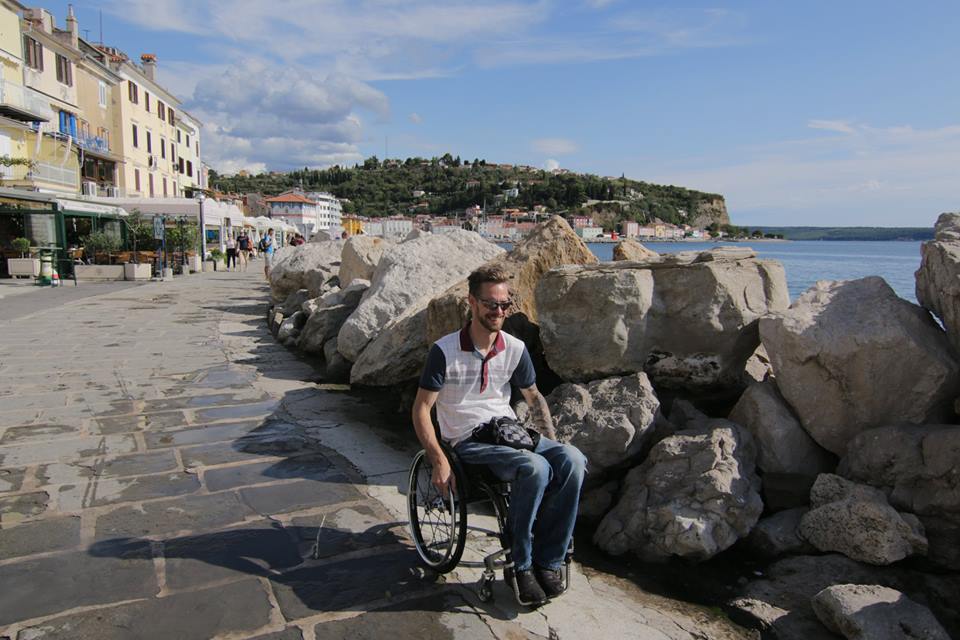 Price per group in 3* hotels:

How do you check accessibility?

All the hotels, sights and activities are personally checked by our employee Anže, who is a wheelchair user since 2008.

Yes. All the destinations, transport and hotels are suitable for electric wheelchairs also, although some activities will maybe have to be skiped.

Do you provide someone to accompany a disabled person?

Don't take our word for it

Hi Danijel, Thank you! It was great to meet the team, and we really enjoyed our tours and our interactions with you, Miha, and Urban. All the best, Shaina

All the daytrips were very good. The day in the Alps was fantastic, with stunning views. Petra and Urban are both very kind. And the eurokey that you lent us solved the issue of toilets. I would like that in our travels we find more agencies like yours that will make it easier for us to enjoy the trip. It is not always easy to find transport adapted to our needs or agencies that answer so quickly to all our questions.

Thank you so much for everything.

We are a group of 4 friends from Finland and spent a week in Slovenia: Bled, Portoroz and Ljubljana. 2 of us use electric wheelchairs so we booked all the transfers and one day tour from NoLimits Tours. Everything worked perfectly! Service was really good before we arrived and we got answers to our questions very quickly. Our driver was really good and spoke good English. The car was big enough for 2 electric wheelchairs. Daytour to Koper and Piran was excellent and our guide Danijel was very good. Everything really was 100 % accessible and I can truly recommend for everybody!

Get to know food and handicrafts traditions of Slovenia.

Do you have a question or would you like to get personalised offer?

you can choose based on your interest or time you want to visit:

All the best of Slovenia

Holidays in wonderful Slovenia, also known as the country on the crossroads and the only country that has the word LOVE in its name.

A week of wheelchair friendly adventures in Slovenia.

Does no tour suits your needs and wishes?

No problem at all.

Every year we respond to hundreds of wishes of people who wish to know which are the best disabled friendly places to visit in Slovenia and we enable them to take a break that they may not have previously believed possible.

Let us know your wishes and we will suggest and create completely customised tour just for you.

Tell us about your wishes

Our partners have many other relaxing tours for you.